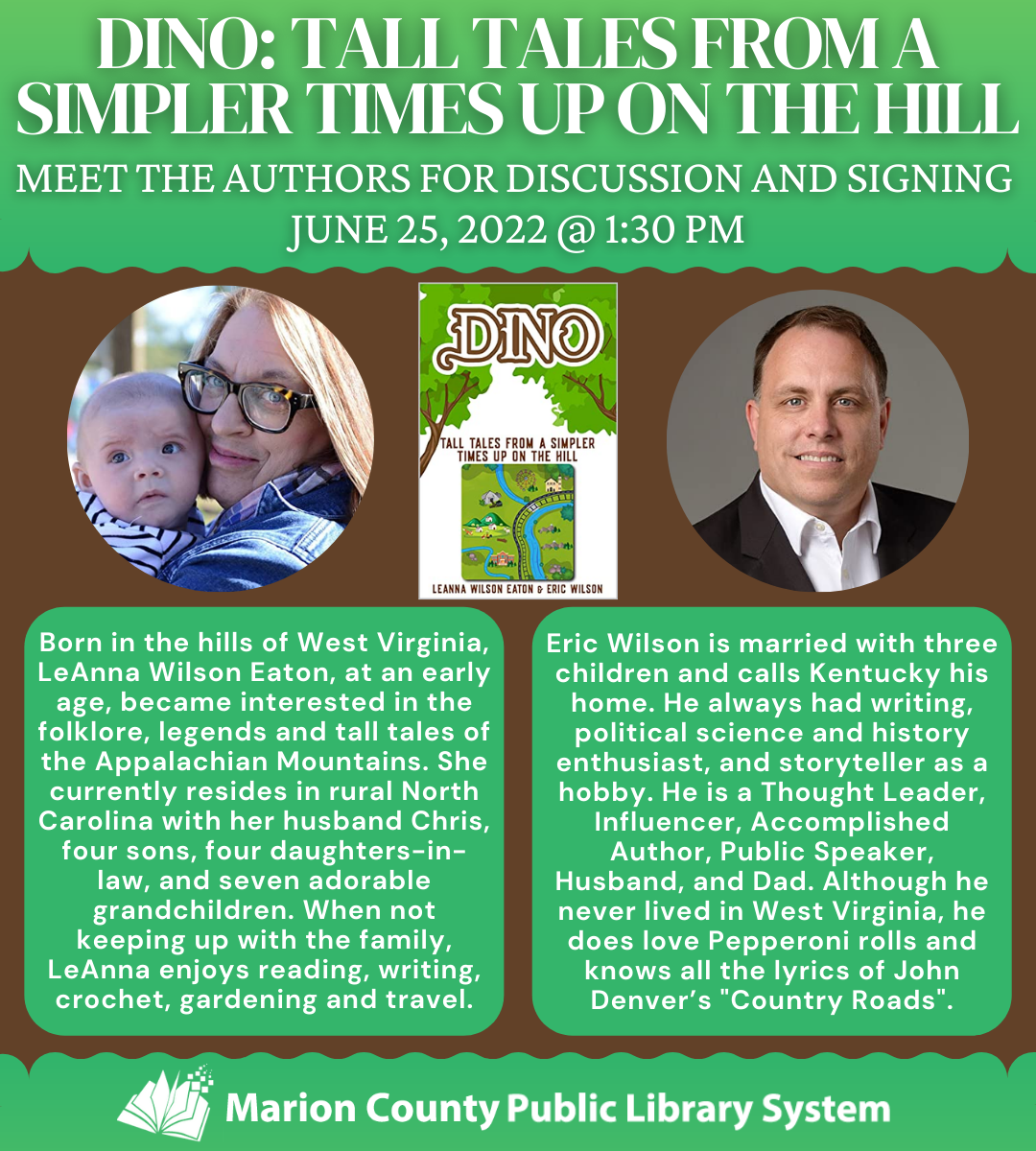 Join authors and siblings LeAnna Wilson Eaton and Eric Wilson to hear some tales, meet folks from their hometown, and hear about how their book came to be.

Born in the hills of West Virginia, LeAnna, at an early age, became interested in the folklore, legends and tall tales of the Appalachian Mountains. She currently resides in rural North Carolina with her husband Chris, four handsome sons, four beautiful daughter in laws, and seven adorable grandchildren. When not keeping up with the family, LeAnna enjoys reading, writing, crochet, gardening and travel. Eric Wilson is married with three children and calls Kentucky his home. He always had writing, political science and history enthusiast, and storyteller as a hobby. He is a Thought Leader, Influencer, Accomplished Author, Public Speaker, Husband, and Dad. Although he never lived in West Virginia, he does love Pepperoni rolls and knows all the lyrics of John Denver’s "Country Roads".

In Dino: Tall Tales from a Simpler Times Up on The Hill, the storytellers and brother and sister, LeAnna and Eric Wilson, transport you to a time and place while making you laugh and look forward to the next adventure. This book recalls an earlier time, perfectly capturing the life and all the vitality of the men and women who grew up in American’s coal camps during the mid-Twentieth- Century through the eyes of a young carefree boy looking for fun and finding mischief. The tall tales introduce readers to the wacky adventures of a child named Dino in a series of slightly exaggerated and downright funny stories. Often joined by his friends Jimmy, Pete, and Patty you will be laughing as they chase lightning bugs, frogs, skunks, and a chicken on steroids. You will fall in love with the characters and their mamas with tales of Sunday night baths, trips to the company store, and Mrs. Myrtle get’n the vapors after something Dino had certainly done. Dino: Tall Tales from a Simpler Times Up on The Hill, is a story of family, food, and fun from the porches and gravel roads of a small coal camp that will capture your heart and your funny bone.